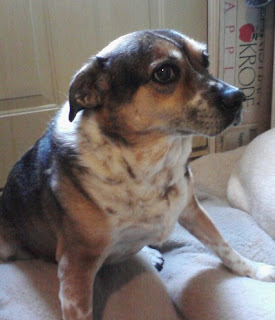 ...our senior pup.  He was a leftover from a neighbor's litter; we let him hang around for a few years, then finally did the responsible thing, neutering and vaccinating.  He turned into a very good house dog, probably because he's afraid to be anything else.  A textbook Omega dog, he's afraid of his shadow.  We named him Calico because a wussy kitty name suited his wussy  kitty personality, and he was the right color.  During thunderstorms, he crawls under the bed and tries to dig a hole to China.  Then I pick him up and snuggle with him, and he drools, pants, and trembles.  You'd think by now (he's 12) he'd know he's safe!  He has good, predictable pack manners, and he's the last puppy to be raised by Princess Goldenpaws.  Someday I'll cry my way through a tribute to her - she was a great dog.  (PFC was her first puppy, and what a mom she was!)

Cal usually allows Sadie her "me first" shenanigans, but he holds his own, and she rarely crosses him.  He's afraid of Scooter-evil-kitty, (we all should be) he tolerates Ollie, (my profile pic) and he worships little Lizzie.  She's an independent predator with extra toes, but she plays very gently with the old man.  He's a good boy, and yet another unexciting aspect of my, um, rather unexciting life.  Not that I mind. 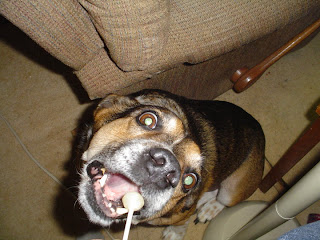 Dumb as dirt, sweet as pie.