You will be deeply missed.

http://shiningpearlsofsomething.blogspot.com/2011/05/cal.html
Posted by Unknown at 8:07 AM 14 comments:

A Wrench in the Works

It looks like old dog Cal had another stroke today, same as last time.  I can't say I'm grateful for the last one, but because of it, I think I can handle this without BH.  Guess It's a good thing I do all the "animal stuff."  Tomorrow's my day off so I'll take him to see Doc first thing.  I have him settled down with his favorite pillow and he's not shaking anymore.  I hope he was just scared and not in pain.  He's sleeping now.  The one thing I know for sure is that he can't take much more of this.
Posted by Unknown at 3:49 PM 5 comments:

7man, from Complementarian Loners posted a series of comments I made on Dalrock's blog this week.  I am deeply flattered.  I'm a bit of an odd bird (you may have noticed) and I thoroughly enjoy these long discussions - they make me  think, and work through the logic (or lack of it) behind my views.  I wish I could come up with stuff like this for my own blog...
*sigh*
Here's the link:

and here's a teaser:
Suz says:
Women crave a man we can follow with confidence. Like children we test boundaries, checking for inconsistencies; when we find none, we feel safe. THAT is an environment which fosters maturity and mutual respect.

*** not safe for work***
http://thebloggess.com/2012/01/the-post-where-i-make-it-up-to-you-and-then-make-things-worse-and-then-apologize-again/

No, I didn't surf the net and pick out some random weirdness.  Both of these songs have been very dear to me for many years.  My weirdness isn't random.

This is from the "Monster Hunter Nation" blog.  Some of the cool kids are linking it, because it's really that good!!!

(It's hard to pick a single paragraph from a whole page of pure gold...)
Posted by Unknown at 3:22 AM 5 comments:

There are NO cigarettes ANYWHERE in the house, the car or the garage.  I checked.  The two spares on BH's bathroom shelf are gone, as is the half-smoked one in his ashtray.  If I don't take the trash out soon, I will be scavenging for butts in there.  Nicotine gum helps.  A little.

I can't wait to get to work tomorrow, where I'm accustomed to not having the little fuckers around.
Pardon my French.
Posted by Unknown at 1:13 PM 13 comments:

Hey Jack. Yeah, it's Been a While

I just had my first taste of Jack Daniels in 30 years.  Drowned in Sprite, it's not so bad.  And the smell is bringing back good memories, not the bad ones.  My youth in the background (Ipod) helps.  Roxy Music and the smell are carrying me back to a bar in Lake Geneva - I don't even remember the name.  I used to tip the bartender really well, and he gave me "free" shots. "Seven" not Jack.  Wearing my red 9-West shoes at Hogs N' Kisses.  Dancing at that border-bar.  *Long Cool Woman!*  Now I feel like dancing!  The only night I ever blacked out and lost time, at Jude's house when her P's were out of town.  Hey Jude, "Time to feed the fish!"  Heh heh heh.  You had to be there. (Of course.)

I only drank a few times before I was 18.  The drinking age in Illinois was 21, but it was still 18 in Wisconsin - 20 minutes away.  I drank a fair amount before I married.  Considering the way I took to cigarettes, I'm surprised I didn't "develop a problem."  It's probably a good thing I married a guy who rarely drinks, because now I do too.  I had phenomenal tolerance too.  Rabbit metabolism or something.  I weighed 110 and routinely drank beefy farm-boys under the table. * Oooooh Cheap Trick!*  My all-time favorite band back then!  I was so jealous of SisterFed!  She saw them in concert the year "Live at Budokan" come out.

Roxy Music's cover is my favorite version of *The Midnight Hour.*  Should I apologize for that?  Now I'm remembering my favorite vacation: all by myself when I was 20, I spent a weekend in Baraboo.  I stopped at yard sales, watched a little league game across the street from my motel, and spent a day at the Circus World Museum.  I drove all around, and went to a railroad museum in North Freedom.  Rode a steam train, naturally.  By the time I got to the Frank Lloyd Wright house at Spring Green, it was closed for the day.  Bummer.  I loved being alone, especially with my music.  I still do.  Being with people, but apart.  They noticed me because I was pretty, and they probably thought I was weird.  I couldn't care less.  I am weird, but I like myself just fine.

I swear I'm not drunk, just relaxed and a little melancholy.  I kind of dread these occasions when I get in touch with my feelings; feelings are scary and I don't let them interfere with what I need to do in life.  This isn't bad, though.  No panic, for one thing.  No regrets either.  Looking at the past through rose-colored glasses perhaps.  No harm, no foul, right?  No ambitions outside of my own mind right now.  *Heart - These Dreams - great song.*

Lance Criminal called, looking for Dad (who arrived without incident.)  He wanted advice on buying a new computer to take to The Stan.  I'm glad he's doing it.  I was afraid he was planning to depend on camp computers.  When I told him Dad was on the road, he asked if I was OK.  I said I'm fine - the TV is off and the Ipod is on.  I don't want him to worry. *Hmm.  Duran Duran - Last Chance on the Stairway.  Some of their lesser known songs grab at my soul, unlike Hungry Like the Wolf which reminds me of one crappy night in college*

The TV is off and although I dug my Ipod out of my purse, I haven't yet plugged it in.  It's nice to hear the clock ticking.  An hour ago Better Half packed up his truck and headed for the east coast with his new roomie.  He left behind one and a half packs of cigarettes; since he won't be home for about a month, we should both be past the worst of the withdrawl by the time we see each other again.  He's in good hands though.  He and Roomie are BFFs (maybe not "forever," but for twenty-odd years) and he's going to be reacquainting himself with old colleagues and getting a huge pay increase.   The next few months are going to be rough on both of us, but worth it.  Our budget will be tighter than we had hoped, but looser than it might be.

I can actually see the floor in his "nest," and the room is suddenly bigger than I remembered, but by the end of the weekend I predict it's going to feel mighty empty in here.  And Miss Lizzie-kitty is going to become my constant companion.  She's lost her best bud (and she will punish him somethin' awful when he comes home.)  I'm fighting a sinus infection so my fibro has me weak; I'm going to get some extra sleep this weekend, but my main chore will be to develop a battle plan for this house.  (Before I pack, I'm going to organize and inventory everything we own, outside of the Black Hole of Tooldom.)

But dang, I'm gonna miss that man, he's my rock.  I'm glad I have a lot of thinking and planning to do to keep myself busy, because my emotional plate is full and I just hate it when my feelings weigh me down.  Better Half is gone,  Lance Criminal is going overseas soon, Oliver-kitty will probably have to be euthanized sometime in the next few months, I'm about to quit smoking, my first "moving chore" is going to be wading through 23 years worth of files and making decisions on what to keep and what to burn (I'm not going to burn out the new shredder...) and I'm sick.  I'm having a little pity party, and I need some tea and sympathy (or maybe a stiff drink) but for now I think I'll settle for a hot bath and a nap.  Then I 'll crank some tunes and do something productive.  It's going to be a long 3-day weekend...
Posted by Unknown at 6:05 AM 5 comments:

Weer'd posted this on his blog today.  I've been reading Massad Ayoob in "Backwoods Home" magazine, off and on for 20 years.  He had some kind words for Weer'd, and he posted a video that really makes the point.

Would You Jump Off a Cliff...

...if that's what all the cool kids were doing?

Weer'd says,"So on January 8th I ask everybody to post a picture of a lit candle and you carry gun," in this post:
http://www.weerdworld.com/2011/light-a-candle-to-stop-violence/


And her's an inspiring follow-up:
http://www.weerdworld.com/2012/do-more-than-just-light-a-candle/ 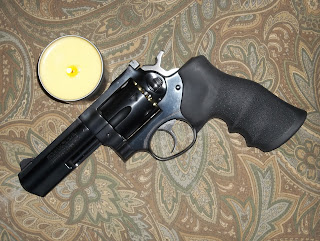 (with no apologies to that voice in my head, which sounds suspiciously like my mother.)