Feeling sentimental today.  I don't have much time for poetry, but I have a few favorites.  Mostly by Edna St. Vincent Millay.  This is my all-time favorite:

My first favorite poem was The Ballad of the Harp Weaver; it was in my 6th grade reading textbook, and I rediscovered it as an adult.  And wow! It was by my favorite poet!
Posted by suz at 3:58 PM No comments:

No letter from Recruit this week, so the nest feels extra empty.  His friends have been writing, so I suspect he spent his free time answering them.  Not that I resent it, I've just been thinking about Thanksgiving for two.  We were never big on turkey, so Better Half usually makes a Big Southern Feast.  He's a better cook than I am, but this year he asked me to make my World Class Cardiac Lasagna.  Sounds good to me!  I guess I feel kind of guilty about Recruit eating plastic turkey and potato flakes.  I'm hoping they let the boys call home for the holiday, and assuming they'll at least get a little extra free time.  Family is important to the Marines, right? Although the boys have been there long enough to start seeing the Corps as family, I hope they give Thanksgiving and Christmas more than a cursory nod.  I also hope they'll allow parents to sent special treats.  When they do, they require enough for the whole platoon, but I don't have a problem with that - I'll be more than happy to make fudge and caramels for all (I AM good at deserts!)  It's a shame my cookies have such a short shelf life and don't ship well.  Last year I got the "Martha Stewart  Cookies" cookbook, and now everyone at work thinks I'm a great cook!  Not a big fan of Martha's perfect little world, but I do recommend that book.  It doesn't require too many obscure kitchen gadgets or hard-to-find ingredients.  If you buy it, DO NOT skimp on the Dutch process cocoa.  Twice the price and not sold everywhere, but worth it!

BwaaaHaHaHa!  You have NO IDEA how ironic it is that I'm giving out cooking advice!  Is it a sign that the world really has turned upside down?  Guess I'd better re-learn how to hang from my heels!  Wonder if I could still climb a tree...
Posted by suz at 10:15 AM 1 comment:

What Life is REALLY All About 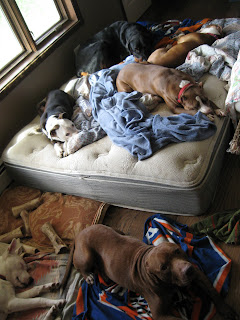 Was I supposed to be a guy? I look just like a girly-girl, but I don't think I am. I don't get how women think. I can understand it, but my next question is always "Why bother?" Female logic tends to be ambiguous and convoluted, and conducive to manipulation. When I listen to women talk, I'm always a few steps behind; it takes me a while to figure out what they're really saying. I used to think it was just good manners, talking around the point instead of making the point, and I always felt like I was lacking some social graces. Well, Of course I am, but I don't think that's what this is. I think it's tact gone horribly awry. At best. At worst it's dishonest. Have you ever responded to a man's statement, only to have him say, "I'm sorry you took it that way, that's really not what I meant."? Men almost always say what they mean. If it's bad and they don't want to hurt your feelings, they stammer and change the subject. Right? Male logic is much simpler. Yeah, I get the irony, but I say that with respect, not smug pity. I like simplicity. It gets things done. I'd rather speak my mind and be dead wrong, than wade through a pool of murky ambiguity. And how are we supposed to predict a response, or do other women just play along, because they're pretty sure of where this is going? Is this something women instinctively know? Am I missing the gene? Seems to me like a waste of time and words. I've always been more comfortable around guys; I think we speak the same language.
Posted by suz at 6:58 PM 2 comments:

Ever read the Bible?  Specifically the New Testament?  More specifically, the teachings of Jesus Christ, who is the only known divine human in the history of the world? (that is, assuming you believe...)  I've heard a few sermons about what would happen if Jesus came to this world today, as a human being.  They were pretty vague, intended to make us consider the differences between the true Jesus and our modern idea of him.  He was, after all, quite the radical in His time, and He would be today as well.  Here's what I think would happen if Jesus appeared in human form, today in America:

He would teach about love and forgiveness, saying that these principles are more important than the old rules of the church.  He would tell us that we should give our worldly possessions to the poor, and trade high social status for humility.  Notably absent, I suspect, would be any angry tirades against non-Christians, gays, public aid parasites, or whoever else we love to hate. He would tell us that he loves them, and so should we.  (He may actually have a bone to pick with the moneylenders.)  He might perform a few miracles, convincing those around him that he is indeed our divine Father.  Then Word would get out, so to speak.

Skeptics who see His "miracles" on TV, would assume special effects were involved, and would ridicule believers for their gullibility.  The mainstream "liberal" news media would have psychiatrists and sociologists explain that He is a well-intentioned, idealistic man who's clearly delusional, and may be planning to start a potentially dangerous cult.  Keep a close eye on your loved ones, especially those with mental illness and low self esteem; they could be vulnerable.

TLC would try to sign Him for a reality-TV show.

The leaders of the Christian church would immediately recognize him as a threat to their authority and income, and would promptly denounce him as the Anti-Christ, here to deceive us and lead us all to Hell.  Given the opportunity, they would cheerfully (and righteously, of course) crucify him all over again.

Fox news would scream, "Socialist!!"  "Anti-American!!"  "Bleeding heart liberal!!"  Bill O'Reilly would verbally annihilate Him in an interview, and Jesus would not protest.  Glenn Beck would stand in front of a chalkboard, and tell us that Jesus is clearly the most dangerous man in America.  He would illustrate, in terms a moron could grasp, how this "so-called Savior" uses his charisma to prey upon the uninformed, and to indoctrinate our innocent children, turning their pure little hearts away from all that we-as-Americans hold dear.  "Just like Hitler."

Jesus himself would be squashed like a cockroach in modern America.  His words, however,  live on quietly in the hearts of many, hopefully overriding the teachings of society and religion.
Posted by suz at 10:45 AM 4 comments:

I'm just an old mom, really, and a mutt.  Alpha bitch in my pack (Please don't tell the dog!)  I'm descended from the Cunniffs of County Meath, Ireland (hence the Black Hound,) several people involved in the Salem witch trials, A POW during the Revolutionary War, an Italian witch doctor, and  a convicted cattle rustler.  That I know of.

I have a husband that I'll keep, thank-you-very-much, and a son in the Marine Corps.  Cats, dogs, and a dumpy little house in the country, with several acres and a pond.  I drive a bookmobile for a living, but I've had several  varied mom-jobs throughout the last 18 years.  I think I'll stick with the library until I retire.  My politics are moderate, with libertarian leanings.  I'm a cop supporter (Dad, sister) and although I support the military, I have no use for the current war.  I own guns and support gun rights.  I also support  sensible animal advocacy; I'm a volunteer transporter for rescued dogs.  I despise what passes for news on television, especially Fox.  (It reminds me of my little brother when he was young - he thought the best way to win an argument was to say any dumb thing that popped into his head, and to keep saying it, as loudly as possible.)

I try to make a habit of researching (and of course validating) my opinions before I put them up for public scrutiny/ridicule, since I hate to be wrong.  My favorite question is, "Why?"  My BS detector works pretty well, and I think red herrings smell pretty rank.  Nothing puts me to sleep faster than smug plodding prose.