Corporal's leave is just about over, and his presence has been an immeasurable comfort to me.  The most difficult work (emotionally and physically) is done and I'm left with a neat, comprehensive list of tasks to keep me busy and focused until I sell the house and move.

Today we did a little family history.  My dad was born not far from here and recently he emailed me the address of his childhood home.  We looked it up on Google Maps and went for a drive: 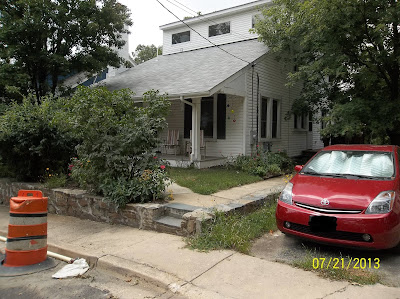 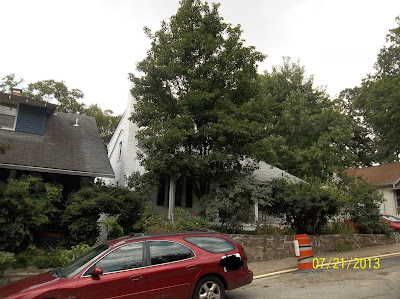 
(Any idea how the heck I managed to change the date on these photos?  I sure don't have a clue!)
Posted by Unknown at 6:44 PM 4 comments:

I am taking lots baby steps toward the future while Corporal and other members of my family take umbrella steps over and around me, settling the estate and getting ready to move back to Hooterville.  What we have collectively accomplished in days, would have taken me months on my own.  Mac knew we had raised a fine son, but these past two weeks would have blown his mind.  That young man has his head on straight and he can work like a machine.  The Marines are lucky to have him.  Many of our most urgent tasks have now been accomplished, and I find myself with a few quiet hours now and then.

It has been two and a half weeks since Mac's death. My wedding ring no longer feels "new" on my right hand, and today I changed my Facebook status to "Widowed" (does that make it more official?) Neither seems to make it more real. Having spent part of last year in a Commuter Marriage, I'm still half expecting a text telling me what time to meet him at the airport.

In spite of this wrenching loss, I think I'm one of the most fortunate people on this planet.  I spent twenty-five years married to a man I never deserved (no, I'm not being modest) and I have a family whose love, kindness and generosity defy description.  I also have more friends than I ever realized.  I am humbled and overwhelmed by the kindness and the offers of support and help that I have received from so many readers, both here and at AVfM, most of whom I have never met in person.  I thank you from the bottom of my heart.

Emotionally I've been somewhat numb, out of necessity, but not completely shut down.  Back in early June, when Mac and I came home after his CT scan, and his doctor called to send him back to the hospital for admission, I was looking over his shoulder as he wrote down what they found on the scan.  (I have since thrown out that scrap of paper, but those words are forever etched in my mind.)  I knew right then what was coming but none of us knew how fast it would happen, and the panic attacks started immediately.  I hid most of my fear and grief from him because I didn't want him to worry about me - and he would, especially being too sick to offer me much comfort.  But I learned how to cry again.  I don't cry often and I rarely get upset, but there was no denying I had a lot to cry about and I couldn't pretend otherwise.  I spent those three weeks grieving, both for what he would face and for what I would face. Of course he hid his fears from me as well; I might try to convince myself that he had no idea what was happening in his body while we waited for a diagnosis, but I'd just be deluding myself.  He was hoping to regain enough strength to fight the cancer, at least for a while, but he knew where it was heading. And I now know that he was protecting me and carrying his burden even more quietly than I was carrying mine.  Like he always did.

It is just such realizations which bring the tears.  While stumbling through estate paperwork and attending to the many tasks I need to accomplish, I keep tripping over so many things he has done for my benefit, things he did without my knowledge, never expecting a word of thanks.  And I'm absolutely certain there is much more that I'll never know.  He never "kept score."  He never expected praise for his praiseworthy actions. He simply, reflexively even, did to the best of his ability, what he knew he needed to do.  Right up until hours before he died.  And not once since I've known him has he complained that it wasn't fair, even when it really wasn't fair.  Maybe he took pride in being a man I could take for granted, while I tried hard not to take him for granted.  I guess I'll never know, but I sure wish I could have at least a few more years to try to even the score, that score he never kept.  I know I was a pretty good wife, but he was a man who deserved so much more.

I probably won't be writing with my heart on my sleeve any more; it makes me uncomfortable anyway. I'll continue to move forward now, but a part of me will be kicking and screaming along the way for quite some time. I just don't want to leave him behind. I believe he's with me in spirit and I know that his personality has largely shaped my personality, so he'll never be entirely gone.  And I see much of him in our son.  I know that those ashes buried in a bronze box in his hometown are not what I treasure of him, but it was so hard to walk away from his grave.  My life is not empty or meaningless, and I suspect it never will be, but there's a Mac-shaped hole in my heart that I couldn't fill even if I wanted to. I'll have to get used to that.

That title should be read, not with dismissal, but with skepticism.  I subscribe to the school of though that recommends viewing with suspicion, anyone who puts an adjective in front of the word "man."  Such adjectives often imply a standard that may not be entirely honest.  I believe that a "good" man is just about any man who believes himself to be good, according to his own carefully considered standards.  There are many men though, who would be considered good by nearly everyone's standards, and my husband was among them.

June 30, 2013 was WolfAlpha's and my 25th wedding anniversary.  It was also the day he died.  He was 58 years old.  Six weeks ago he was working as usual, four weeks ago he saw his doctor to address what he thought was a stubborn case of hay fever, one week ago he received a definitive diagnosis of pancreatic cancer, and a few days later he died.  Early the next morning, our son arrived from Afghanistan.  Next week we will bury my husband's ashes beside his parents.

In spite of his flaws, twenty-five years with him was not enough; I've known all along I was lucky to have him.  He was a good man.  When he committed himself to anything, he committed himself fully, but he never let anyone tell him what was worth committing to.  He followed most of the rules because sometimes you have to go along to get along, but he has been known to occasionally follow those rules with open contempt and he never allowed anyone to believe they were putting one over on him.  He had few illusions and his Bullshit Detector was finely tuned - even with me.  Nobody manipulated him without his knowledge and consent.  He was strong, so strong, both mentally and physically.  Perhaps the nickname WolfAlpha was prophetic.  Like many a well-bred and well-trained police dog, he worked at his usual pace until he dropped, never letting a weakness slow him down.  I thank God he knew how to relax and enjoy life as fully, rather than waiting for a retirement that he dared not count on.

He taught me the same thing.  I would not be the person I am now if I had not married him.  I was vain and shallow and lacking direction when we married.  I had no idea what I wanted out of life, but he showed me what was worth having, and what was worth being.  And he gave me more than I ever deserved.  We did not have a "perfect marriage" or a "perfect love."  What we had grew stronger in our efforts to overcome its imperfections.

Rest in peace, Conard Brewer McCarley Jr.  I love you and I will miss you.