If I ever again start attending church on a regular basis, I think I will look for a church with a gay minister, and/or a gay youth minister.  (And as long as I'm living in Hooterville, that probably won't happen.)

I think I've already mentioned how I feel about modern Christianity essentially ignoring Jesus, only to fawn all over the OT prophets.  You know, using the ten commandments and Leviticus, etc. as weapons of judgment and exclusion.  (I've never met a single Levite in my 47 years as a Christian;  exactly how do their laws apply to me again?)  Suffice to say that not only do I believe homosexuality is not a sin, I also believe that persecuting gays to any degree whatsoever is a sin.  And if by chance it might be a sin against God to be exactly what God made you to be, (?????) judgment is His domain, not ours.  We need to stick to ordinary human justice, since that's a concept we can actually comprehend, and sexual preference is not related to justice.  (Mine sure isn't, so how is anyone else's?)

Why Gay?
1. Dedication: Who could be more committed to God than someone who dedicates his life to serving those who, at best feel superior to him and pity him, and at worst despise and reject what he is?
2. Empathy:  Need spiritual guidance?  Would you seek it from a "respectable," possibly revered person whose faith may or may not ever have really been tested? Whose moral authority is rarely questioned?  Or would you want to seek out someone who's been in the trenches most of his life?  Someone who really understands the nature of compassion, and conflict, and the pain of rejection, abuse and injustice?  Trust me, a gay minister knows how you feel when you're hurting; he has walked that path.
3.The children:  There are a lot of emotional abusers and pedophiles in the church, and their authority goes unquestioned!  The vast majority of pedophiles are straight males, and many are ordinary-looking married dads who love to take part in family-oriented activities.  Like church.  Like youth programs at church.  The chances of your children being victimized by a gay minister?  Just about nil.  And no, he won't "recruit" them.  For one thing, he can't - it's not a choice.  Additionally, he wouldn't if he could.  Why would a person who cares about the well-being of kids, entice them into a "lifestyle" that would guarantee them a lifetime of abuse and rejection?  Duh.  And rest assured, the ignorant, narrow-minded members of the congregation would keep him under a microscope; I suspect a gay youth minister would never even have the opportunity to abuse a child, were he so inclined.  So the worst he could do is to teach the them that it's okay to love the people that "Good Christians," um, DON'T, because God does love them.

Any homosexual who has the the strength and the courage to follow Christ, in spite of Christ's other followers, is probably the truest sort of Christian on earth.
Posted by suz at 10:13 PM 9 comments:

I'm a  little late posting this; it took some help from Better Half to figure out the file.  I hope you can read it, and share my fond memories of a hometown reporter's last day. 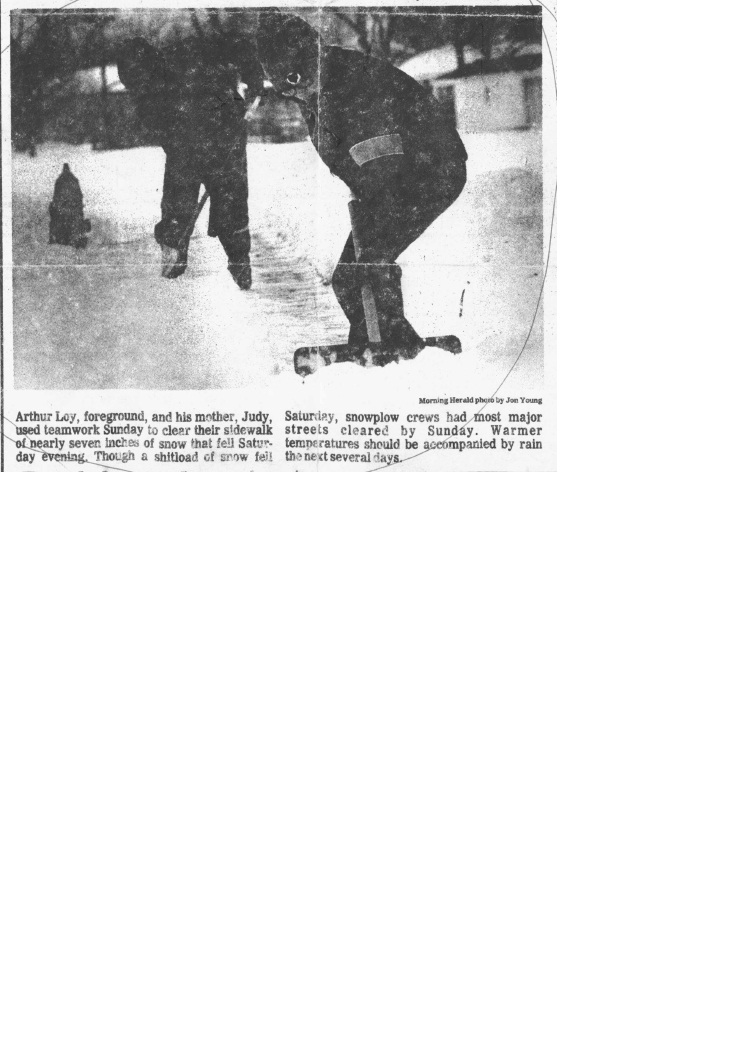 Lisa, over at Not So Simply Single, that's who.

Having been happily married for more than 20 years, this issue doesn't come up with men in my life, but I know a few other people who look down their superior noses at  my cheerful demeanor.  I must be awfully dumb, since I just don't understand why they despise life.  Must be a blonde thing.

Last year I started listening to the audio-book "Where Men Win Glory," by Jon Krakauer, about Pat Tillman.  I simply couldn't finish it because it made me sick with anger.  (But it was excellent)  Today I watched the DVD "The Tillman Story."  Again, sick and exhausted by my anger.  I wondered why it wasn't called "The Pat Tillman Story," and now I know.  It's as much about his extraordinary family as it is about him.  They are amazing people.

I'm pretty good with vocabulary.  I recognize emotional trigger words, and I discount them in favor of facts.  You have to be subtle to manipulate me with vague language.  There was very little such language in this documentary, and most of it came from politicians and others with something to hide.  Duh.  The bald, unvarnished facts of the Tillman case are appalling enough to make me queasy.  Simply put, his death was tragic in two ways.  First, it was a mistake, and second, he was a beautiful young man, in every way.  "Mistake" will have to suffice because it was certainly avoidable, and nobody wanted to kill Pat Tillman.

What I find disgusting beyond words is the politics of deceit, denial, and cover-up.  Admitting the truth wouldn't change anything.  It would merely be honorable.  A man can die for honor, while his so-called superiors can't bring themselves to suffer a little embarrassment for it.  Who are these soulless monsters we send to Washington?

Yet another argument for term limits.

Most of you already know the GunDivas, so yes, this may be redundant.  I'm posting the link and I donated.  Let's all make a little noise, give what we can, and maybe save a life or two.