→  "Girl Writes WHAT???" ←   posted her speech on her blog, aptly named "Owning Your Shit."  Follow the link to an amazing and pivotal statement.

Feminists like to yap about "Patriarchy Theory," but they never really explain it;  GWW (Finally! Somenone!) does, in clear (read: non-"academic") language.  Then she debunks it by comparing it to real oppression.  She goes on to describe how gender ideologues have used laws, policies and even human nature, to confer excessive privileges on women at the expense of children and men, primarily by "replacing" men (to whom women once had obligations) with the government (to which women owe nothing but their votes.)

Read it.  It's long but it's a comprehensive overview of how destructive and completely non-egalitarian feminism has become.

(I have been wanting to address the bullshit that "The Patriarchy!" is for a while now, but there's no longer a need; this speech sums it up far more articulately than I ever could.)
Posted by Unknown at 7:25 PM 3 comments:

Feminists just can't pass up an opportunity to > play the victim card,< even if it means publicizing Big Red  and attempting to portray her as a helpless, faint-hearted hand-wringer.
Posted by Unknown at 9:39 PM 6 comments:

Commenters on >This Post < at AVfM are clamoring for a shirt quoting the last line:

"Skies and stars and infinite dreams. That’s what little boys are made of."

I'd wear it proudly.  It got me thinking about something else I'd wear on a t-shirt, so I opened up "paint" and made a crude rendition of it.  I'm pathetic with graphic art, so it's a good thing it's supposed to look like a child wrote it! 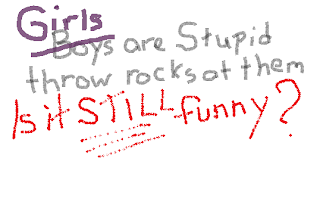 The phrase "Blue Star Mother" is slowly being overtaken by "Blue Star Family."  Perhaps a few people are noticing that it's no only mothers who miss their deployed warriors, and it's about time.  That said, last week I ordered Blue Star window clings for the cars and the house, because once again WolfAlpha and I are a Blue Star Family.

So yeah, instead of coming to see dear old Mom and Dad, The Corporal has gone back to The Sandbox.
Maybe later this year...

One of today's headlines:

"Please Stop Telling Us When to Get Married"

Debate With a Feminist

I had a great birthday yesterday.  WolfAlpha gave me a Kindle Fire HD, so now I can read and surf the net away from my desk.
There was another gift >> another not-so-peaceful "protest" at the University of Toronto,  << well covered by A Voice for Men, the "real" press, and at least one "free speech" group.

And here's my gift for you.  Take 12 minutes to watch the video of the lovely "red" haired feminist over on the  AVfM post.  (At the moment I can't embed it here, no doubt because "Blogger!")

A Little Man-Shaming, for a Change of Pace

My latest article on AVfM


A few questions for the men of UTSU

Reading articles and watching videos about recent events at the University of Toronto, a bit of a side issue keeps popping into my head, and I think it’s time to address it. Who are these men anyway? Who are these male feminists who participate in the protests? Guys, are you reading this? As yet we have been unable to identify you, otherwise I’d use your names. But seriously, I’ve got to ask you: Why do you do this? What makes you tick?

What kind of men are you?

I don’t ask that to challenge your manhood, but simply to try to understand it. As a men’s human rights activist and the mother of a young man, I hesitate to engage in any sort of man-shaming.  Hearing, “Man the fuck up!” from a woman is the very last thing any man needs to hear, at least that is what I believe. So please don’t mistake my inquiry for that kind of judgement on you or whatever you define your masculinity to be.

However, it seems pretty clear that somewhere in your identity as men that you feel it necessary to demonize other men who are struggling to understand their place in the world but have at least figured out that a self-loathing feminist narrative is not what they want. Is it your job, as a man, to demonize them? To stop them? To bully and harass them for simply existing and looking for answers?

I must state from the outset that I am not confusing you with the poor kid in the vagina costume. I’m pretty sure he’s damaged beyond redemption.  I don’t even want to imagine how he came to so thoroughly despise his own sex, but he has my pity, not my contempt.  Ironically though, those of you who otherwise participate in these “protests,” wearing masks, pulling fire alarms, blocking doors and suppressing free speech probably think  you’d never debase yourselves in that manner.  Yet you do.

You just don’t do it wearing pink plush female genitalia.

So please tell me, why do you support an ideology in which some people think ninety percent of you should be dead?  Are you perhaps deluded enough to believe that you would number among the “lucky” ten percent?  If so, I have news for you.  I didn’t see one of you that looked either hot enough to be a sperm donor or strong enough to build infrastructure, so exactly what qualities do you possess that might give you immunity in a Feminist Utopia?

Do you think your sycophancy will earn you their heartfelt approval? Maybe a little pussy? Is that, for you, the price of selling your fellow man down the river?

Do you think you’re Super Special?  Are you somehow “evolved” enough to earn respect and compassion from those whose ideology hinges on denying those things to all men? Do you think these particular women even have compassion? Why not ask Vanja Krajina about her compassion for men? Wait, I know, it is hardly fair to refer you to a sociopath. So instead, ask any of the women you are so eager to please about compassion for men and boys. Ask a non sociopath, if you can find one in the ranks of those women telling you where to step and where to fetch. Just ask for the proof of that  compassion.

Then see how fast you go from hot to rot.

You see, you really don’t get it, do you?  You are nothing but tools to them, pandering toadies who protect all their dirty little secrets for whatever payoff you imagine you are getting.

Could it be that you feel guilty for your “Male Privilege”?  If so, please tell me how privileged you feel paying your own tuition, knowing that many of your classmates receive scholarships and preference in admissions because they have vaginas?  How privileged do you feel knowing that after you graduate you will have to wait in line behind them (regardless of their or your abilities) for almost every job opening?  Is this something you think you deserve, as some sort of reparations for all of the men throughout history who provided for, protected, fed, sheltered “oppressed” women?

Do you have an overblown sense of chivalry that compels you to sacrifice everything, including your masculinity and your dignity (not to mention all critical thought) in order to protect these poor, helpless, oppressed darlings that have you jumping through hoops with a snap of their fingers?  Is that why you puff out your chests like pale imitations of silverbacks, of a John Wayne on estrogen, bravely carrying out their ill will on other men you don’t even know?

Oh.  Wait a minute!  Now I get it.  Hah!  You Guys!  This really is all about the pussy, isn’t it?  Of course it is!  You men are all alike, aren’t you?  You just wanna get in their pants!  (Duh!)  Now that actually makes sense. But do be careful, as this plan could backfire and literally cost you a pound of flesh.  Well, half a pound anyway.  And most of you, if I may be so direct, you’re doing it wrong.

Do you read “Game” sites and books?  Maybe you should, because believe me, enrolling in Women’s Studies classes may get you close enough to the girls to sniff their asses, but it will also get you freindzoned a lot more often than getting you laid. And those sites and books might actually help you understand that you really can get pussy. You don’t have to keep settling for a pat on the head and a “goooood boy” in exchange for selling your own humanity down the river. That is exactly what you are doing, by the way.

Because that IS the kind of men you are; insinuating yourselves into the good graces of some really intellectually skanky women, playing Captain Macho Bodyguard/thug/lapdog at public events, or wherever she snaps her fingers and points to. It is the beta move of a wannabe alpha. Take it from me, as a woman, you can do better than that. Oh, and you might want to notice that the guys they are actually fucking are not the ones hopping around like trained bunnies trying to please them.

I know, I know. This is in all likelihood not going to reach you. Men like you have always opted to settle for the smell of pussy, even when it remains out of reach, when confronted with the fear of your choices taking even the smell away.
But I had to try. I had to make the attempt to reach out and help you understand how self defeating and pointless your action are. And how pathetic.

I am an advocate for all men and boys. Even men like you, which I think in the course of writing this I have come to understand better than when I started asking all those questions.

Thanks for listening, though.  I guess we’ll be seeing you at the event Thursday night.  Remember to smile for the cameras!
Posted by Unknown at 9:48 AM 8 comments:

...Which I should have posted last week.

Good stuff.
Posted by Unknown at 8:02 PM No comments: