Are You Drunk Yet?

(If you stare at the black blob, the bed-spins will stop)
Posted by Unknown at 5:27 PM 6 comments: 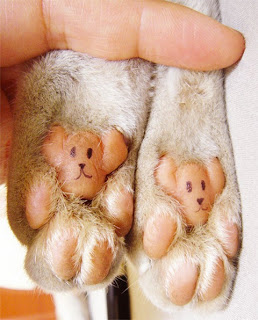 We Got Over That a While Ago...

I was pleased to see not too much hoopla over DADT becoming history.  I guess all the vitriol lost some steam in the face of  so many blank stares from people who wonder what the hell the big deal is.  It seems that most of the people who object to it are non-military, a few retired military, and church representatives within the military.  I asked Lance Criminal (in his new gray belt) what scuttlebutt says, do the rank and file really care?  (As if they don't know they've been serving alongside gays the whole time...)  His answer:

"We got over that a while ago."

Well said, young man, well said.  Do you suppose the military has finally come to the end of the list of patriotic, competent, honorable, qualified candidates to exclude?  Now, if only Churchianity had so much courage.
Posted by Unknown at 5:46 PM 8 comments:

I Just Bought a Witch's Hat for Halloween

This photo, taken by Leigh Cummings, shows a memorial for Mary Easty that is part of the Salem Witch Trials Tercentenary Memorial (dedicated 1992) in downtown Salem. It is adjacent to the 17th century Charter Street Old burying Point.


Of course the real story of the Salem witch trials was one of power and wealth - politically motivated people taking advantage of a disruption in the lives of ordinary people.  It started with a handful of bored teenyboppers, and it ended when the PTB's decided it was all hogwash - right about the same time that the "possibly unwarranted accusations" were making their way up the food chain and threatening the wives of said PTB's.


I visited Salem long before I knew Mary and I were blood relatives.  My utter hatred of evil committed in the name of religion, predates my knowledge of that connection by many years.  Kind of a cool coincidence, isn't it?  Or maybe it's hereditary... What I Should Have Said

A few weeks back, Weer'd put up an interesting post about the 9/11 memorial. I chewed on it for a while, then I got sick, so I didn't write down my thoughts. His focus was on the cross-shaped bit of rebar from the rubble, and that the American Atheists organization was protesting its inclusion, because it's a religious symbol. There followed a discussion about the constitution and religion. Feel free to read it; Weer'd's pretty cool, and I identify with him as a former liberal and gun enthusiast.
http://www.weerdworld.com/2011/those-whaky-athiests/

I really like this point:
“Still as a former Atheist I gotta wonder what the big deal is. Sure I get upset if somebody gets up in my grill or actively judges me (I’m most impressed with the people who pray for me simply because I don’t subscribe to their theology) for not believing what they believe, or when I see them supporting bashing of other ideologies or lifestyles, or if they’re “praying away the gay” or forcing your kids in public school to Memorize the Ten Commandments in social studies, or study the Book of Genesis as an alternative to Darwinian Evolution.
Still thinking you can go through life not believing in a higher power and be insulated from religious icons, relics, or seeing religious ceremonies or practices isn’t very realistic.”

My first thought is about the Constitution. I don't know the history of case law on the topic, but logic tells me that acknowledging religion is not the same as establishing a state religion. And if it's a slippery slope, well, there's another slope on the other side of the same hill: refusing to acknowledge religion as banning religion. It's all a matter of degree, isn't it?

The thing that really got me though, Weer'd's last statement:

"...Grow up and get over yourself. Not believing in these things SHOULD mean they don’t have any power over you!”

Isn't rational thinking the hallmark of most Atheism? The Atheists I know are generally very intelligent and logical. So why are they bothered by the inclusion of religious symbols in a government-sponsored event? Especially in this case, where the “cross” is literally a found object, rubble, not a commissioned piece? I think there are some vocal Atheists who are being very subjective in their protests against something as subjective as religion.

Among the comments was this: “... there are a number of things people *don’t* believe in and don’t attach labels to them for doing so… If you want to believe that it is faith that unicorns don’t exist.. you are entitled to your opinion. Could I be wrong in thinking they don’t? Sure.. but I’ll keep not believing in unicorns.”

This was, of course in response to my insistence that technically, Atheism is a matter of faith, a belief without proof. ( And yes, I understand that Atheism is as broad as deism; there is no single “doctrine.”) Naturally, being me, trying to hold my own among some very smart people, it took me days to figure out the point I was trying to pursue. Hence, my title.

Some people DO believe in unicorns (and some of them are actually adults.) How many Atheists protest the unicorn in a sculpture at the Old State House in Boston? Some people believe that Pan is a real deity, and there is a sculpture of him in the Capitol building. Any protesters? There are fifty silhouettes of pentagrams on the United States flag. *crickets.* These are all, quite literally, religious symbols sponsored by the government. My theory: these are symbols of minor religions, unimportant ones. Unimportant to those who don't follow them, but very important to those who do. So groups like American Atheists object only to symbols of big powerful religions, religions followed (and led) by lots of folks who would be happy to rule others according to their beliefs.

It's not about religion, is it? It's not about personal beliefs regarding divinity. It's about politics. Truly rational Atheists would ignore the symbol, because the only power it has is the power given to it by each and every individual, believer or not. Violation of the Constitution comes not from objects, but from people who would use any tool to restrict the rights of others. The real issue isn't faith or religion, it's freedom.

So. What am I missing? This topic has been rolling around the edges of my brain for five weeks, and frankly, I'm feeling a bit smug about my conclusions here. That's a bad sign. I've learned that when I have the answer, I'm not always asking the whole question; my own biases usually blind me to something. Any glaring fallacies or assumptions here? In my quest to be "right," I welcome (rational and gentle, please) criticism of my logic. I hate to be wrong. When I am, I want to fix that. Insights?

This is the real reason Washington eviscerated the fourth amendment; power over us, not power over terrorists.
Courtesy of:


Peter is more liberal than I am.  Isn't it funny though, how much patriotic liberals have in common with patriotic conservatives?  It's almost as if liberalism and conservatism aren't as important as The Constitution of the United States!
Posted by Unknown at 11:22 AM 4 comments: